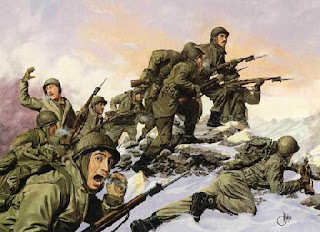 “Do I not hate those who hate you, O Lord?  Do I not loathe those who rise up against you?”  Psalm 139:21
Strong language.  And there is no ambiguity in the Hebrew.  Moreover, this militant spirit runs throughout the Bible.  In the New Testament, for example, Paul curses anyone who perverts the gospel (Galatians 1:8-9).  We cannot tear this thread from the biblical fabric without shredding the whole.  But how does this intensity fit into the gospel of loving one’s enemy?
One, gospel militancy is not personally spiteful.  David does not say, “Do I not hate those who hate me, O Lord?”  We know that David could humbly accept personal abuse without retaliating (2 Samuel 16:5-14).
Two, gospel militancy recognizes that Christ has real enemies.  “Do I not hate those who hate you, O Lord?”  There are beasts and false prophets, as in the Revelation, both outside and inside the church.  Their hostility toward Christ is sometimes aimed at us.  But it’s still about Christ.
Three, gospel militancy is (1) required by love for Christ and (2) compatible with love for his enemies:
(1)  We must choose sides, clearly and openly, as David did.  There is nothing more tragic than a Christian man who is hard to read.  David had the guts to stand up for Christ, because he valued the Lord’s approval more than human approval.
(2)  We must both love and hate those who oppose Christ.  What we hate about them is their opposition to him.  What we love about them is his creation of them.  John L. McKenzie, in the American Ecclesiastical Review 111 (1944): 90, distinguished the odium inimicitiae from the odium abominationis.  The former is the psychology of personal malice.  It is sinful.  The latter is more complex.  It values and honors the divine creation of the other, while it disapproves of the perversities to which the divine creation is devoted.  It would be wrong not to disapprove.  But in this same complex sense, we both love and hate ourselves too.
Four, gospel militancy includes self-criticism.  Immediately after his outcry in verse 21, David also prays, “Search me, O God, and know my heart!” (Psalm 139:23).  David was as suspicious of nothing in the world as he was of himself.  He asked God to change him in any way God wanted.
Five, gospel militancy accepts suffering.  Loyalty to Christ is loyalty to a crucified Hero.  Standing boldly for Christ doesn’t mean we have to win; it just means standing, whatever the outcome.  Frederick William Faber:
Then learn to scorn the praise of men and learn to lose with God;
For Jesus won the world through shame, and beckons thee his road.
Six, gospel militancy is sustained by the final triumph of Christ.  Miroslav Volf, Exclusion and Embrace, page 302: “The certainty of God’s just judgment at the end of history is the presupposition for the renunciation of violence in the middle of it.”
Christ is coming.  He will judge.  That is his prerogative alone.  Our part, moment by moment, is to maintain the strong but delicate complexities of gospel militancy until he comes, whatever the cost to us personally.
by Dr. Ray Ortlund is Lead Pastor of Immanuel Church in Nashville, Tennessee
Posted by Real Deal Manhood at 5:44 PM