On Mission: The Church Isn’t A Cruise Liner or Battleship But An Aircraft Carrier 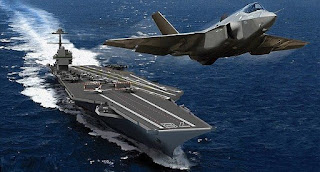 Many people are bored in church. They are afflicted with a nagging sense that they ought to be doing something—that there is some meaningful mission they are supposed to be a part of. But they can’t quite get their mind around what that is, and so, in the meantime, they sit in church, try to pay attention, give their tithes, behave as best they can, and wonder if when they get to heaven they are going to be rebuked for failing to do whatever it was God wanted them to do.

Perhaps these people go to churches where they hear that Jesus is building his church and that the gates of hell will not prevail against them. But they don’t see themselves, or their church, prevailing against the gates of hell. They seem to be just getting by. Many can’t remember when a single adult convert—one truly brought out of darkness into light—came to Jesus in their church. And they certainly can’t remember one whose story they were personally a part of.

Most churches have a difficult time maintaining their ground, much less storming anything that belongs to Satan. Gates, after all, are defensive ramparts, not offensive weapons. “Prevailing against the gates of hell” does not mean keeping Satan out of our backyards, but plundering his kingdom. According to a recent Lifeway Research study, in the next seven years 55,000 churches in the United States will close their doors, and the number of those who attend a church on the weekend in the United States will drop from 17 percent to 14 percent. Only 20 percent of churches in the US are growing, and only 1 percent are growing by reaching lost people.[1]So 95 percent of the church growth we celebrate merely shuffles existing Christians around.

Don’t you think these two problems—believers who don’t know how effectively to disciple others, and a gradually shrinking church in the West—have to be related in some way? Yet very few pastors and church leaders see raising up disciple-making leaders as their primary objective. We measure success by size. In so doing, however, we neglect the one thing that can propel the church forward into the next generation … and to the ends of the earth: Spirit-filled, disciple-making disciples.

I believe we need a fundamental shift in how we think about the mission of the church. Let me illustrate, using three types of ships.

Cruise Liner
Some Christians see church as a cruise liner, offering Christian luxuries for the whole family—sports, entertainment, childcare services, and business networking. They show up at church asking only, “Can this church improve my religious quality of life? Does it have good family ministry facilities? Does the pastor preach funny, time-conscious messages that meet my felt needs? Do I like the music?”

If their church ever ceases to cater to their preferences … well, there are plenty of other cruise ships in the harbor. In fact, often they get involved with three or four of them at once. After all, the music is great on Cruise Liner A, and the kids enjoy the youth program at Cruise Liner B, and we do most of our fellowship and Bible study with friends at Cruise Liner C, and we occasionally podcast the angry young pastor down the road who tells the funny stories.

Battleship
Other Christians believe their church is more like a battleship. The church is made for mission, and its success should be seen in how loudly and dramatically it fights the mission. This is certainly better than “cruise liner”; however, it implies that it is the church institution that does most of the fighting. The role of church members is to pay the pastors to find the targets and fire the guns each week as they gather to watch. They see the programs, services, and ministries of the church as the primary instruments of mission.

I would like to suggest a third metaphor for the church: aircraft carrier. Like battleships, aircraft carriers engage in battle, but not in the same way. Aircraft carriers equip planes to carry the battle elsewhere. My grandfather served on the USS Yorktown during World War II, and he explained to me that the last place an aircraft carrier ever wanted to find itself engaged in battle was on its own deck. In fact, anywhere near it. We used to watch old World War II movies together—the kind where they intersperse actual battle video clips—and my grandpa once paused a John Wayne movie to show me where he was standing on the deck when a plane crashed on deck and broke in half. When you are on an aircraft carrier, he said, the goal is to keep the battle as far away from you as possible. You load up the planes to carry the battle to the enemy.

Churches that want to “prevail against the gates of hell” must learn to see themselves like aircraft carriers, not like battleships and certainly not like cruise liners. Members need to learn to share the gospel, without the help of the pastor, in the community, and start ministries and Bible studies—even churches—in places without them. Churches must become discipleship factories, “sending” agencies that equip their members to take the battle to the enemy.

By James David (J.D.) Greear (born May 1, 1973) is the Pastor of The Summit Church in Durham, North Carolina (a position he has held since January 2002) and the 62nd President of the Southern Baptist Convention.[1] Before coming to work at The Summit he worked with the International Mission Board.[2] He entered the Ph.D. program at Southeastern Baptist Theological Seminary in 1999, graduating in 2003 with a doctorate in Philosophy, concentrating primarily on Christian and Islamic theology.[1] He is also a graduate of the Word of Life Bible Institute and received his Bachelor of Arts from Campbell University. Greear comes from Winston-Salem, North Carolina