Baseball vs. Football by George Carlin Baseball is different from any other sport, very different. For instance, in most sports you score points or goals; in baseball you score runs. In most sports the ball, or object, is put in play by the offensive team; in baseball the defensive team puts the ball in play, and only the defense is allowed to touch the ball. In fact, in baseball if an offensive player touches the ball intentionally, he’s out; sometimes unintentionally, he’s out.

Also: in football, basketball, soccer, volleyball, and all sports played with a ball, you score with the ball and in baseball the ball prevents you from scoring.

And only in baseball does the manager or coach wear the same clothing the players do. If you’d ever seen John Madden in his Oakland Raiders uniform you’d know the reason for this custom.

Now, I’ve mentioned football. Baseball and football are the two most popular spectator sports in this country. And as such, it seems they ought to be able to tell us something about ourselves and our values.
I enjoy comparing baseball and football:
Baseball is a nineteenth-century pastoral game.
Football is a twentieth-century technological struggle.
Baseball is played on a diamond, in a park. The baseball park!

Football is played on a gridiron, in a stadium, sometimes called Soldier Field or War Memorial Stadium.

In baseball the specialist comes in to relieve somebody.

Football is played in any kind of weather: rain, snow, sleet, hail, fog…

In baseball, if it rains, we don’t go out to play.
Baseball has the seventh inning stretch.

Football has the two minute warning.
Baseball has no time limit: we don’t know when it’s gonna end – might have extra innings.

Football is rigidly timed, and it will end even if we’ve got to go to sudden death.
In baseball, during the game, in the stands, there’s kind of a picnic feeling; emotions may run high or low, but there’s not too much unpleasantness.

In football, during the game in the stands, you can be sure that at least twenty-seven times you’re capable of taking the life of a fellow human being.

And finally, the objectives of the two games are completely different:

In football the object is for the quarterback, also known as the field general, to be on target with his aerial assault, riddling the defense by hitting his receivers with deadly accuracy in spite of the blitz, even if he has to use shotgun. With short bullet passes and long bombs, he marches his troops into enemy territory, balancing this aerial assault with a sustained ground attack that punches holes in the forward wall of the enemy’s defensive line.

In baseball the object is to go home! And to be safe! – I hope I’ll be safe at home!

Posted by Real Deal Manhood at 11:26 AM No comments:

Who Are You? A Man's Identity 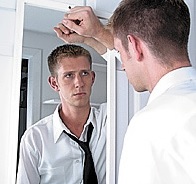 What gives a man his identity? On what foundation are you building your sense of self? Your answer whether true or false, defines your life.

Wrong ways of defining who we are arise naturally in our hearts, and the world around us preaches and models innumerable false identities. What are the ways men get identity wrong? Perhaps you construct a sense of self by the accomplishments listed on your resume. You might identify yourself by your lineage or ethnicity, by your marital status or parental role. Your sense of self might be based on money, on achievements, on the approval of others, on your self-esteem. Perhaps you think that your sins define you: an angry man, an addict, an anxious people-pleaser. Perhaps afflictions define you: disability, cancer, divorce. In each case, your sense of identity comes unglued from the God who actually defines you.


Who God says you are
God’s way of sizing up a man goes against the grain of our instinctive opinions and strategies. Rather than giving in to the culture’s view, allow these biblical realities to orient you:

But that’s not all. There are a few foundational truths that we need to understand in order to root our identity in the right place. Don’t skim through. You will never be gripped by these truths if you treat them merely as an information download.
Every core aspect of a man’s identity expresses some form of humility, need, submission, and dependency before the Lord. Our culture and our hearts might claim that masculinity means being independent, self-confident, proud, strong, assertive, decisive, tough-minded, opinionated, and unemotional. But Jesus is the true man,and he is unafraid of weakness, lowliness, and submission. He came as a helpless and endangered child. He became dependent, poor, afflicted, homeless, submitted—an obedient servant entrusted with a job to do. He became a mere man and died in pain—committing his spirit into God’s hands, depending by faith on the power of the Spirit to raise him.
God raised him from the dead, you will be saved. For with the heart one believes and is justified, and with the mouth one confesses and is saved.” (Romans 10:9–10) Ask God to help you establish your identity in him today!

By David Powlinson was a teacher, a counselor, and the executive director of the Christian Counseling & Educational Foundation for many years. He passed away earlier this year. He received his PhD from the University of Pennsylvania and was also the senior editor of the Journal of Biblical Counseling. He wrote a number of books, including How Does Sanctification Work?; Making All Things New; and God's Grace in Your Suffering.
Posted by Real Deal Manhood at 5:21 PM No comments: