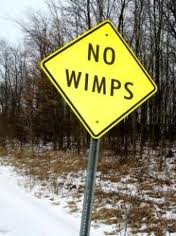 Back in 1999 church historian Dr. Leon Podles wrote The Church Impotent: The Feminization of Christianity. The ground breaking volume traces the historical and sociological roots of what has become the lopsidedly feminine cast of modern Christianity. More recently Christian comedian Brad Stine has  characterized the phenomenon as the "wussification" of men. In Genesis 3, we see the origin of male passivity when Adam wimped out on his God-given responsibility to resist evil and lead with the truth.
Back in 1890 Horatius Bonar, Scottish churchman and prolific and popular writer, warned against this soft, effeminate Christianity that comes when men are afraid to resist evil and falsehood and to fight for what is good and true. What Bonar saw then is now rampant in today's culture of passive, emasculated men, which unfortunately is more and more evident in the church.
"For there is some danger of falling into a soft and effeminate Christianity, under the plea of a lofty and ethereal theology. Christianity was born for endurance…It walks with firm step and erect frame; it is kindly, but firm; it is gentle, but honest; it is calm, but not facile; obliging, but not imbecile; decided, but not churlish. It does not fear to speak the stern word of condemnation against error, nor to raise its voice against surrounding evils, under the pretext that it is not of this world.
"It does not shrink from giving honest reproof lest it come under the charge of displaying an unchristian spirit. It calls sin ‘sin,’ on whomsoever it is found, and would rather risk the accusation of being actuated by a bad spirit than not discharge an explicit duty. Let us not misjudge strong words used in honest controversy. Out of the heat a viper may come forth; but we shake it off and feel no harm.
"The religion of both Old and New Testaments is marked by fervent outspoken testimonies against evil. To speak smooth things in such a case may be sentimentalism, but it is not Christianity. It is a betrayal of the cause of truth and righteousness. If anyone should be frank, manly, honest, cheerful (I do not say blunt or rude, for a Christian must be courteous and polite), it is he who has tasted that the Lord is gracious, and is looking for and hasting unto the coming of the day of God.
"I know that charity covers a multitude of sins; but it does not call evil good, because a good man has done it; it does not excuse inconsistencies, because the inconsistent brother has a high name and a fervent spirit. Crookedness and worldliness are still crookedness and worldliness, though exhibited in one who seems to have reached no common height of attainment."
Dave Brown is Director and Pastor-at-Large of the Washington Area Coalition of Men's Ministry (WACMM) founded in 1999 to serve and support pastors and churches in the mid-Atlantic region.
Posted by Real Deal Manhood at 3:23 PM No comments: