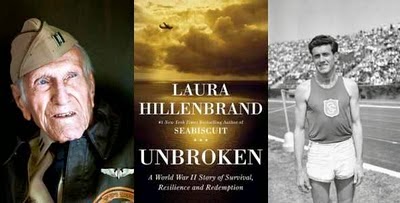 In his youth in the 1930’s, Zamperini was an incorrigible troublemaker and school bully but he could run like the wind. He became a champion runner and competed in the 1936 Berlin Olympics and so impressed Adolph Hitler and Nazi propagandist Joseph Goebels they asked for a personal meeting. In September 1941, he joined the US Army Air Corps and flew a number of combat missions in the Pacific as a B-24 bombardier.

Then in May 1943, his plane crashed on a routine search mission in the Pacific, and Zamperini and one other survivor drifted on a raft some 2.000 miles over 47 days before being taken prisoner by the Japanese. He spent the next two and a half years in several brutal prison camps undergoing horrendous torture, abuse and starvation.

After the war, he returned to California angry and bitter with what we now call Post-traumatic Stress Disorder (PTSD). He experienced haunting nightmares and severe alcohol abuse. His wife Cynthia who had become a Christian decided not to divorce Zamperini. Instead she insisted he join her at Billy Graham’s historic 1949 Los Angeles Crusade. There he came to faith in Christ and his whole life changed immediately. Of that night Zamperini wrote this:

[Graham] quoted Scripture: ‘For all have sinned’ and so forth. And I thought, I don't need him to tell me I'm a sinner. I know I am. I started to get up to leave, and he said, ‘When people come to the end of their rope and there's nowhere to turn, they turn to God—no matter who they are.’ I thought, Yeah, I made thousands of promises on the raft and in prison camp. He kept His promises, but I didn't keep mine. So I went back to the prayer room and made a confession of faith in Christ. While I was still on my knees, I knew my whole life had changed. I knew that I was through getting drunk—that I'd forgiven all my guards, including the Bird. I just couldn't believe it was happening.”

He went on to share the gospel around the nation and world and endlessly told his story of rescue and redemption. In 1950 he returned to Japan to meet and forgive his Japanese captors.

Zamperini recently said the book “Unbroken has had a tremendous influence, and it has turned into a God-given opportunity to share the Gospel. The book has yielded an unbelievable ministry.”

The movie Unbroken will bring Louie Zamperini’s powerful story of courage, faith and endurance to even more millions of people around the world. What remains unclear at this time is how much of Zamperini’s faith in Christ will the film’s producer Angelina Jolie will put on the screen. We will be following future developments about the movie and will report them to you in our monthly e-newsletters.

By the way, the 97 year old Zamperini resides in Los Angeles and will be grand marshal of the 2015 Rose Parade.


Posted by Real Deal Manhood at 8:39 PM No comments: