What Bruce Jenner's Hands Tell Us About Caityn Jenner,,,and About God

NOTE:The following is from Chapter 13 (Open Hands) of Andrew Walker's new book God and the Transgender Debate: WhatDoes the Bible Actually Say About Gender Identity? - which  we highly recommend! 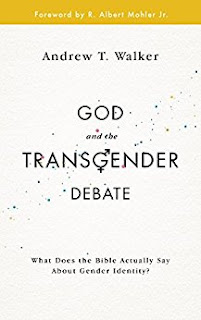 In chapter two, I made a fleeting reference to a particular detail of Caitlyn Jenner’s famous appearance on the cover of Vanity Fair. It was this: there were no hands visible in the photo. They were out of shot, placed behind Jenner’s back.

Why mention this again at the end of the book? It’s because the absence of Jenner’s hands from the photo was surely intentional. A blog post by a photographer went viral after the Vanity Fair release:

“One of my mentors has always said, a good photograph should stand on its own, meaning it alone tells its story and the backstory is irrelevant. If you accept this, what I see when I look at this image is a badly posed person looking awkwardly at the camera … I am confused— why are the hands hidden? The very masculine shoulders, arms, and legs suggest to me that this is a drag queen— notwithstanding the breasts, a flare to the hips, and a lack of an Adam’s apple, as I know all of that can be achieved through Photoshop— and that the photographer just did not know what to do with large, mannish hands. And so [he] told the subject to hide them.”[ 30]

Why finish this book talking about hands? Because the lack of hands on the cover of Vanity Fair— the cover that has perhaps done more than anything else to make gender transition mainstream and attractive— tells us a great deal not only about Jenner’s struggles for self-acceptance but about the very nature of the transgender debate.

The fact is that in that photo shoot, Jenner went to every possible effort to demonstrate femininity, and took every step possible to assert sex appeal as a woman— eyelashes, breasts, facial work. But the hands did not, could not, follow. And that tells us something: Our existence simply cannot be remade or recast without remnants of our true self somehow remaining.

We can try to tamper with God’s design, but how he made the world and each of us continues, even when it goes against our will, to shine through. Jenner had to hide his hands from the camera, because Jenner’s male-born hands are a reminder that whatever perception we have of ourselves, there are objective traits to our existence that tell the truth about who we really are. Our hands don’t tell us everything about who we are. But they do remind us about how we have been made.

All of us try to hide parts of our existence— whether physical or emotional. All of us feel some sense of shame about some of the realities of who we are. We humans have been hiding since the Garden of Eden. And since that moment, we’ve also been craving for a stable sense of identity and a deep knowledge of acceptance.

Which takes us to another pair of hands.

Now Thomas, one of the twelve, called the Twin, was not with them when Jesus came [after he had risen from the dead]. So the other disciples told him, “We have seen the Lord.” But he said to them, “Unless I see in his hands the mark of the nails, and place my finger into the mark of the nails, and place my hand into his side, I will never believe.” Eight days later, his disciples were inside again, and Thomas was with them. Although the doors were locked, Jesus came and stood among them and said, “Peace be with you.” Then he said to Thomas, “Put your finger here, and see my hands; and put out your hand, and place it in my side. Do not disbelieve, but believe.” Thomas answered him, “My Lord and my God!” (John 20 v 24-28)

Jesus proved his resurrection to his doubting disciples by holding out his hands— real, resurrected hands, with real, nail-caused scars.

Jesus’ hands were, and are, scarred from the cross, where he took the brokenness of the world upon himself in order to redeem his creation. His hands were, and are, a reminder that he was broken so that you and I can be restored— mind, heart, and body. We have a God with scars, who knows what brokenness feels like and who offers a future of real and lasting wholeness, beyond all of the frustration and all of the pain.

And he did not, and does not, hide those hands behind his back.

He held them out to Thomas to prove who he was— the loving, suffering Savior— and to ask him to come to him, and believe in him, and follow him. He holds them out to people still today. He has nothing to hide, and everything to give.

The hiding of Caitlyn Jenner’s masculine hands show that the way through and out of gender dysphoria cannot be to transition our gender. The holding out of Jesus’ scarred hands show that there is a way through and out of all our struggles and brokenness. It is to come to him, and to find forgiveness from him, transformation through him, and forever with him. His words in Matthew 11 v 28 are to us, whoever we are, as he invites us to come to him, and beckons us on as we follow him:

Come to me, all who labor and are heavy laden, and I will give you rest.


Andrew T. Walker (@andrewtwalk) is Director of Policy Studies for the Ethics and Religious Liberty Commission of the Southern Baptist Convention.

Posted by Real Deal Manhood at 1:08 PM No comments: