by Phil Moore, pastor of Everyday Church in London

Editor's Note: Same-sex marriage continues to be a prominent issue in our society today. As church leaders, the way we engage the discussion is critical. In this post, Phil Moore, pastor of Everyday Church in London, offers insight on how the issue has been wrongly framed. Has the same-sex issue been hijacked by political lobbyists? How should the church approach the issue? 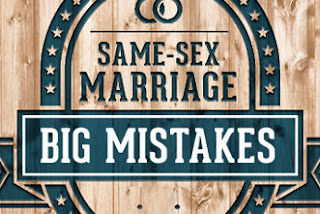 Prime Minister, David Cameron, introduced a bill to the British Parliament, which will be debated on February 5, that is not being opposed by the opposition.

President Obama has used his second inauguration speech to signal that he also intends to legalize gay marriage in the U.S. through federal law.

The French President, Francois Hollande, has dismissed public protests over his support for same-sex marriage as the reactionary chattering of the no-longer-radical bourgeoisie.

But while politicians steamroll their proposals into law, they are ignoring some fundamental questions. Let me point out just three of the big mistakes that they are making:

Mistake #1: Everybody Knows That Same-Sex Marriage Should be Legalized.

Suppose we held a referendum that revealed this statement to be true. Suppose the majority of Britons and Americans actually did believe that same-sex marriage should be legalized — would that therefore make it right?

If the majority of Afghans voted that women should be barred from education, they wouldn’t therefore be right. When the majority of British people voted in the early 19th century that there was nothing wrong with slavery, campaigners didn’t stop arguing that the majority was wrong.

In fact, the essence of the pro-gay argument is that majority opinion has been wrong in the past on the issue of sexuality! Even in the purest of democracies, it is accepted that the majority opinion should be tested rather than turned into hastily drafted law. Consensus has long been the refuge of rascals, who attempt to stifle debate by claiming that the matter has already been decided.

What is becoming clear, anyway, is that the majority of people do not in fact back this major change to society.

Although the British Chancellor of the Exchequer, George Osborne, argued in last Sunday’s issue of The Times that redefining marriage will be a vote-winner for the conservatives, the real noise at the conservative head office is that of the large numbers of Tories who feel betrayed that this legislation was not in the party’s election manifesto. The British Youth Parliament has called on the government to drop gay marriage as a priority. In scenes reminiscent of the days before the war with Iraq, we are watching politicians make decisions without consulting those who elected them, only to regret their hastiness too late afterwards.

When Lady Gaga sings, “Baby, I was born this way,” it makes for good music. When Barack Obama embraces it as a political philosophy, it makes for bad government.

He used his inauguration speech to liken the fight for same-sex marriage to the epic struggle won by Abraham Lincoln against black slavery, and by Martin Luther King Jr. against racial segregation, saying: “Our journey is not complete until our gay brothers and sisters are treated like anyone else under the law — for if we are truly created equal, then surely the love we commit to one another must be equal as well.” Barack Obama is a master at rhetoric, but this is lazy at best and insulting at worst.
Issues of race and of sexuality are entirely different. To try to twist this is not to carry on the journey started by Abraham Lincoln and Martin Luther King Jr., it is to insult what they stood for and to try and hijack their legacy.

It’s entirely right for us to have a free and open debate on whether homosexuality is right or wrong, but it’s entirely wrong to pretend that this is a civil rights issue like black slavery or racial segregation.

This is all about moral choices, not genetics. Barack Obama should be ashamed of himself for insulting the memory of Lincoln and King by suggesting otherwise.

Mistake #3: Opposition to Same-Sex Marriage is a Religious Issue.

In the U.K., David Cameron and Nick Clegg have tried to frame the issue of same-sex marriage as a battle between free-thinking reformers and religious reactionaries.

They have shouted down opposition to their bill by promising that churches and mosques will be protected from being forced to conduct same-sex marriages on their premises, and the Church of England has been flattered into playing along in exchange for a seat at the discussion table. Even if we believe Cameron and Clegg (and let’s face it, it’s hard to do so when Cameron has just warned the church on another issue to “get with the programme” or face the consequences), it is missing the point entirely.

It isn’t just Christians, Jews and Muslims who want to have a say in this issue. Marriages make families and families make society. How we define marriage affects all of us. To deny this is ridiculous.

I received a letter from David Cameron a few weeks ago when I corresponded with him about same-sex marriage. He told me that he thinks marriage is so important that he wants to open it up to same-sex couples as well, which is about as logical as me saying that I like Italian food so much that I want to declare that every cuisine in the world be Italian. It isn’t just an issue for religious people when our governments start redefining marriage with political double-speak which wouldn’t be out of place in George Orwell’s Animal Farm.

Even in decadent Rome, when Emperor Nero briefly legalized same-sex marriage, his pagan Roman subjects opposed his law. The historian, Tacitus, complained that Nero “went through a formal wedding ceremony with one of the perverts named Pythagorus,” and implies that this added to the general public disgust with Nero which eventually led to his forced suicide (Annals 15.37). If the most anti-Christian city in the world opposed gay marriage (remember, these were the people who threw Christians to the lions), then let’s not pretend that opposition to same-sex marriage is a religious issue.

Besides, when Barack Obama refers six times in his inauguration speech to God and four times to the Creator or to Creation, it reminds us that religious people have always had an important role in shaping public policy for good. Not least among them were Abraham Lincoln (a devout Christian) and Martin Luther King Jr. (a Christian pastor). Politicians can’t have it both ways: either they want to associate themselves with God and with the great religious thinkers of the past, or they should come clean and say that they don’t want to.

The reason Barack Obama referred so much to God and to the great religious thinkers of the past is that every U.S. President knows he needs to stand on the shoulders of the founding fathers — who were religious thinkers — thus, to dismiss religious thinkers as nothing more than a group of political lobbyists is an act of insanity. They are those who have routinely submitted their own generation’s thinking to the scrutiny of the wise men and women of old, and who have learned to speak up for what they have learned.

The true political lobbyists are the pro-gay activists who have filled the staff roles in 10 Downing Street and in the West Wing. It is this small, but powerful, clique that has so influenced the politicians that they can’t see the three big mistakes which they are making. Same-sex marriage isn’t a religious issue any more than it is a civil rights issue. It is the coveted ambition of a group of powerful lobbyists who want to stifle debate by claiming the debate is already over.

We mustn’t let them succeed in rushing through this piece of hasty legislation.

Phil Moore leads Queens Road Church in Wimbledon. He also serves as a Bible teacher and evangelist within the Newfrontiers family of churches. He is the author of the “Straight to the Heart” series of devotional commentaries. Phil is married to Ruth and they have three young children. Together, they love eating strange and exotic food, watching movies with lots of popcorn, and reading books by Roald Dahl.
Posted by Real Deal Manhood at 5:05 AM No comments: