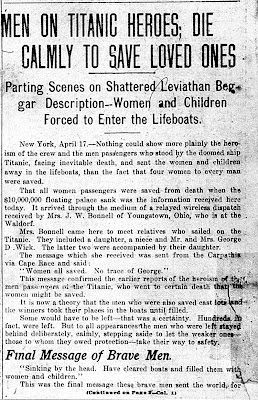 
Act Like Men: A Titanic Lesson in Manliness
by Dave Brown, WACMM Director and Pastor

Churches cannot thrive if there’s not a solid core of men leading them who are Gospel-driven followers of Christ.

When men are absent, lackadaisical or weak when it comes to God and the things of God, churches atrophy and eventually die. If men become ensnared in therapeutic moralism now rampant in many churches, they will become self-focused rather than living sacrificially for the sake of others. And churches will atrophy and die.

Among the many distinguishing characteristics of men who live out of their God-assigned roles and responsibilities are boldness and courage. Godly men - men of true valor - are supposed to fight for their families, the gospel, for the weak, innocent and vulnerable who are being threatened or oppressed by evil and danger.

100 years ago - April 14th, 1912 - the RMS Titanic struck an iceberg with 2,223 people on board. In the midst of that disaster, courageous men sprang into action to ensure that women and children would be saved. Today authentic manhood seems to be sinking. This is one of the most significant issues of our time.Interestingly it is being seen as such by more and more secular analysts and academics but not by most churches. Check out this trailer of a new film called Act Like Men - HERE
Posted by Real Deal Manhood at 2:30 PM No comments: