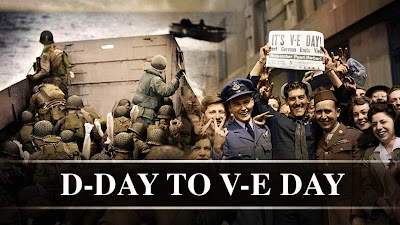 Students of World War 2 have often remarked that although VE-Day was not until May 8, 1945, in a very real sense the war in Europe was over on June 6, 1944 — D-Day. In “Operation Overlord” some 1,000 ships — the largest armada ever to set sail — carried some 200,000 soldiers across the English Chanel to France where they stormed the coasts of Normandy. It was only the beginning of a military buildup that Germany could never have stopped. Anyone watching objectively knew that it was not only a matter of time — not if, but when. The amassing of such military personnel and materiel, the relentless crushing of German factories from American aircraft, the ever narrowing of Germany’s supply lines — all this declared that the difference between D-Day and VE-Day was just a matter of time. And for this reason many have said that it was on June 6, 1944, that the war was over.

I suspect, however, that this rather academic assessment of things differed greatly from the perspective of the soldiers on the ground. They were still dodging bullets and all manner of military force. They were bleeding and wounded, many were still dying, and there were still many harrowing days of the war yet to be endured, even some setbacks. It’s not that our soldiers in France were unaware of the significance of Normady. I’m very sure they understood it well, and this understanding doubtless gave them great encouragement. But from the day-to-day experience of things, this war was still very much in full swing. The dangers were many — and they were everywhere.

I can’t recall where I first heard this analogy and its various forms, but in the circles of Christian scholarship the basic observation is traced back to Oscar Cullmann: There is something about all this that has close resemblance to Christian experience. God himself has invaded history. He came as one of us to our rescue and has fought the decisive battle of the war. In his death and resurrection Christ has “obtained eternal redemption for us” (Heb. 9:12). Final victory has been secured. He has made full and final satisfaction for our sins, and having successfully completed the work that saves he has triumphed over Satan. “Now is the ruler of this world cast out” (John 12:31), the works of the devil are destroyed (1John 3:8; cf. Heb. 2:14), and Christ has forever secured his elect people for eternal life (John 6:38-39).

But then again it does not always seem that way. We are caught up in a real battle. Our adversary walks about like a hungry lion trying to eat us (1Pet. 5:8), and our constant struggles are struggles against him (Eph. 6:12). He takes people captive, and he is powerfully deceptive, masquerading even as an angel of light. Satan is alive and well. Like Hitler, knowing his time was all but up yet launching his last great hurrah at the cost of so many of his soldiers, Satan, knowing his time is short, is on a furious rampage against the people of Christ (Rev. 12) seeking to do what damage he can. And we, the people of Christ, safe though we are in Christ, feel it. And there are casualties. From the perspective of the trenches, the war is still on. Sin, temptation, suffering, injustice, sickness, death, loneliness, disappointment, failure. There are injuries and casualties of all kinds. “Satan hinders us,” and so does the world. And so does our own flesh.

And in the trenches, if we are not careful, we can lose perspective. We must never lose sight of the fact that we struggle in hope and in certainty of final victory. Redemption has been accomplished. It may not yet have been fully applied. There may be many skirmishes still. But it is heartening indeed as we recall that D-Day is behind us. And we are assured by it that VE-Day is ahead. The redemption that Christ accomplished for us will yet be ours in full experience, with him.

Each time we gather to observe the Lord’s Supper we “proclaim Christ death — until he comes.” These are the two reference points of the Christian life, and this ordinance is given us to keep perspective — Christ has come, and he is coming again. Redemption has been secured, and it will be fully enjoyed. And in the meantime we are encouraged, as we gather, to “remember” him as we wait eagerly for him.

It is this gospel-informed confidence that shores us up throughout the conflict. Our Redeemer has come, and he has won. And one day he will come again, and the redemption he accomplished for us all will then be brought to full realization. No more Satan. No more sin. No more suffering. No more curse. The church militant becomes the church triumphant.

“He who testifies to these things says, ‘Surely, I am coming soon!’” And until he does the impassioned heart-throb of the church remains: “Even so! Come, Lord Jesus!”

by Fred Zaspel - (PhD, Free University of Amsterdam) serves as a pastor at Reformed Baptist Church in Franconia, Pennsylvania, an adjunct professor of systematic theology at the Southern Baptist Theological Seminary, and the executive editor of Books At a Glance. He is the author of The Theology of B. B. Warfield (2010) and Warfield on the Christian Life (Crossway, 2014) and has published numerous booklets, articles, and book reviews.
Posted by Real Deal Manhood at 8:16 PM No comments: