So maybe you know that Abraham Lincoln issued the first presidential Thanksgiving proclamation in October 1863, when the outcome of the Civil War and his re-election remained very much in doubt. Whether or not you know the official origins of the Thanksgiving holiday, take a minute to appreciate this selection from Lincoln's vivid words: 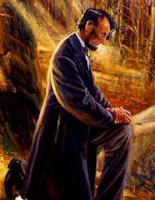 The year that is drawing towards its close, has been filled with the blessings of fruitful fields and healthful skies. To these bounties, which are so constantly enjoyed that we are prone to forget the source from which they come, others have been added, which are of so extraordinary a nature, that they cannot fail to penetrate and soften even the heart which is habitually insensible to the ever watchful providence of Almighty God. . . . No human counsel hath devised nor hath any mortal hand worked out these great things. They are the gracious gifts of the Most High God, who, while dealing with us in anger for our sins, hath nevertheless remembered mercy. It has seemed to me fit and proper that they should be solemnly, reverently and gratefully acknowledged as with one heart and one voice by the whole American People.

However, you probably know less than you think about the true origins of Thanksgiving, whether celebrated by the Pilgrims and Native Americans or codified by presidential proclamation. For example, do you know that Thanksgiving was not formally connected to the Pilgrims until the 1930s? President Herbert Hoover said, "We approach the season when, according to custom dating from the garnering of the first harvest by our forefathers in the New World, a day is set apart to give thanks even amid hardships to Almighty God for our temporal and spiritual blessings."

And today we often lament the commercialization of Thanksgiving, especially as Black Friday specials creep back into Thursday. But did you know that in the middle of the Great Depression, President Franklin Roosevelt temporarily moved Thanksgiving forward one week to make the Christmas shopping season longer and bolster the nation's struggling retailers? Turns out consumerism is a durable American tradition, too.


by Collin Hansen serves as editorial director for The Gospel Coalition. He is the co-author of A God-Sized Vision: Revival Stories That Stretch and Stir. He and his wife belong to Redeemer Community Church in Birmingham, Alabama, and he serves on the advisory board of Beeson Divinity School. You can follow him on Twitter.
Posted by Real Deal Manhood at 11:51 AM No comments: