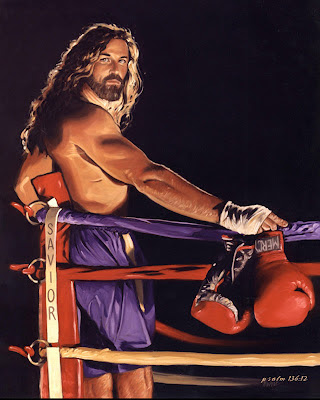 Is Christianity masculine? Has ministry become effeminate? The consideration of such questions by leaders in the Reformed movement (for example, John Piper recently said that Christianity has a ("masculine feel") has initiated a debate about whether the modern resurgence of "muscular Christianity" is scriptural and, more generally, whether cultural expectations should shape Christian views of manhood.


Position #1 - In an article for Modern Reformation titled "Muscular Christianity," Michael Horton, a professor of apologetics and systematic theology at Westminster Seminary, argues that "In the drive to make churches more guy-friendly, we risk confusing cultural (especially American) customs with biblical discipleship":


The back story on all of this is the rise of the "masculine Christianity movement" in Victorian England, especially with Charles Kingsley's fictional stories in Two Years Ago (1857). D. L. Moody popularized the movement in the United States and baseball-player-turned-evangelist Billy Sunday preached it as he pretended to hit a home run against the devil. For those of us raised on testimonies from recently converted football players in youth group, Tim Tebow is hardly a new phenomenon. Reacting against the safe deity, John Eldredge's Wild at Heart (2001) offered a God who is wild and unpredictable. Neither image is grounded adequately in Scripture. With good intentions, the Promise Keepers movement apparently did not have a significant lasting impact. Nor, I predict, will the call of New Calvinists to a Jesus with "callused hands and big biceps," "the Ultimate Fighting Jesus."

Are these really the images we have of men in the Scriptures? Furthermore, are these the characteristics that the New Testament highlights as "the fruit of the Spirit"---which, apparently, is not gender-specific? "Gentleness, meekness, self-control," "growing in the grace and knowledge of the Lord Jesus Christ," "submitting to your leaders," and the like? Officers are to be "apt to teach," "preaching the truth in love," not quenching a bruised reed or putting out a smoldering candle, and the like. There is nothing about beating people up or belonging to a biker club.

Position #2 -- In his reply (Michael Horton, Gender Stereotypes, and Me), Doug Wilson, pastor at Christ Church in Moscow, Idaho and Senior Fellow at New Saint Andrews College, says that Horton's critique appears to rest on a confusion about the role of what gender stereotypes from our culture means since creational differences are expressed in a cultural context:


Suppose you overheard one of the kids from your church telling one of the sweet little church ladies to "eff off." Suppose you confronted him about it, and he defended himself by saying that the meaning assigned to those particular sounds were assigned by our culture, and not by the Holy Spirit speaking in Scripture. Suppose further that he scoffs and says that the whole thing is "linguistically arbitrary." And, you know, he's right, and I suppose you also know that he is entirely and completely in the wrong. It is linguistically arbitary, and he still doesn't get to speak that way.

The Bible never tells us that men should take out the garbage, or that a gentleman holds a seat for the lady, or that opening a car door for your wife is a class act, and so on. Never. But that is irrelevant. Our culture gives us the vocabulary of honor, but the Bible tells us how we must do something with that vocabulary.

Scoring the Debate: Horton makes an excellent point that some Evangelicals---especially those within the "Young, Restless, and Reformed" camp---have created an unscriptural vision of masculinity that is built on "a Jesus with 'callused hands and big biceps,' 'the Ultimate Fighting Jesus.'" In an attempt to make church more appealing to men, some evangelicals churches have even promoted questionable "ministries" which focus on violent sports such as Mixed Martial Arts. These types of activities pervert the view of Biblical masculinity. As Horton correctly notes, the fruits of the Spirit are not gender-specific and are often antithetical to the popular hyper-masculine view of how Christian men should act.

Yet while this is a helpful and much needed corrective, I believe that Wilson is right to point out how Horton has gone too far in separating scriptural admonitions from their cultural context. My own view is best expressed by Denny Burk, Associate Professor of Biblical Studies at Boyce College, who says:


In 1 Corinthians 11, the apostle Paul argues for male headship (1 Cor. 11:3), and he does so on the basis of the order of God's good creation (1 Cor. 11:8-9). Yet in the midst of laying down this creation norm, Paul also references a number of particular issues that are conditioned by cultural considerations. The one that immediately comes to mind is the bit about hair length.

So here is an instance in which the apostle Paul himself says that God-ordained gender roles must be lived-out with an eye toward cultural expectations of masculinity and femininity.
There are other texts that we could go to that illustrate this same principle (e.g., Deut. 22:5), but let's leave it at just the one for now. The point is that we have to live out our gender roles in the culture that we find ourselves in. The apostle Paul probably never wore trousers. But that doesn't mean that he was less masculine for wearing something that would probably have looked more like a dress to us. His own culture informed the way he obeyed God, even though the creation norm remained an ever-fixed mark. He had an eye to his culture's impressions about masculinity and femininity. I don't think we can do any different.

by Joe Carter is a Marine Corps veteran, an editor for The Gospel Coalition and the co-author of How to Argue Like Jesus: Learning Persuasion from History's Greatest Communicator.
Posted by Real Deal Manhood at 5:32 AM