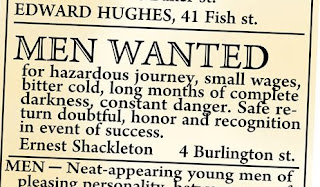 The ad on the right appeared in the London Times IN 1914 and read:

Can you imagine anyone answering an advertisement like this? Well, thousands of men from all over the world did. From among them, world famous explorer Ernest Shackleton chose 27 to sail with him to Antarctica on a ship he named Endurance. In the nearly two years they traveled across Antarctica, Shackleton and his men battled the elements and endured hardships in an adventure that defies description.

Jesus calls us into THE hazardous mission to Planet Earth. Dietrich Bonhoeffer, who was martyred for his faith by Nazi Germany, wrote “When Christ calls a man, he bids him come and die.” In John 6 when Jesus laid out the cost of signing up for life’s greatest adventure with Him, most of those who claimed to be his followers turned back. And they still do today. But there’s that handful who stick it out and say like Peter -- Lord, you're the only one who has anything lasting, anything that really matters. You offer life and we want to be fully alive.

Men, it is those few who look at the hardships, count the cost and still sign on for the expedition who like Peter and the other disciples would change the world. Jesus calls us into his great mission and his great adventure. Like Ernest Shackleton sending out his ad, Jesus talks straight about the "hazards and honor" for those who will risk it all for Him. Wherever you might be in your journey, remember - the easy road, the popular road never leads to anything that really matters. In fact, Jesus said it leads to destruction. So if you want to be fully alive, set sail with the real “Master and Commander” and make a difference that counts forever.
Posted by Real Deal Manhood at 7:21 PM