I hadn’t originally planned to do a post on manhood and confidence/fear, but my wife sent me something I can’t pass up.  I can’t pass it up because, honestly, I think it captures what a lot of men feel.  It’s a quote from Dr. Juli Slattery on Revive Our Hearts:

A man told me, “Every day, I feel like I’m one decision away from failing.” I think he verbalized what most men feel, but don’t know how to articulate.

What do you think about that, brothers?  Ladies, what would your husband say to this?

Men and Women Are Different
I think this man’s comment is spot on for a lot of men.  I know I feel this way sometimes.  And I think it might be one of the ways men and women experience pressure differently.  As I counsel and fellowship with sisters, it seems to me that most women feel like “I gotta get everything done.”  It seems most men feel like “I gotta get everything right.”  So women throw themselves into every task that’s necessary–gotta get up and cook breakfast, prepare the kids for school, get to work on time (did I turn off the stove), work on this report, pick the kids up from school, get them to after-school activity (what am I gonna cook for dinner?), stop by the grocer on the way home, cook dinner, help with homework, oh yeah, spend some time with my husband.  What sometimes looks to women like a lack of leadership or neglecting getting things done is sometimes a man’s fear of getting it wrong.  He thinks, What if I mess this up?  How will this hurt the family, disappoint my wife, once again neglect the kids?  Will I get fired from work if I mess this up or miss a promotion?  Is family worship working?  Does it matter in the scheme of things?

She’s worried about getting it done; he’s worried about getting it right.  For women there’s a certain “too-muchness.”  For men there a “too-risky-ness.”  Now, here’s the potential pitfall.  When she’s busy “just getting things done” and he’s worrying about “not messing up,” she sometimes begins insisting on help and his making a decision or taking an action.  That request isn’t sinful.  But when women are consumed with getting things done and don’t know what might be happening in his mind–the fear of failure and lack of confidence–their simple request, often repeated a number of times, compounds his fear and can paralyze him further.  For him, the stakes feel higher with each insistent reminder or request.  And if the woman’s “ask” comes with a frustrated tone or anger, he not only feels like he’s about to “blow it” but also quietly feels disrespected by his wife. 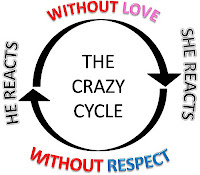 Then you’re into what Emerson Eggerichs in Love and Respect calls “the crazy cycle.”  He doesn’t feel respected so he withholds love.  She doesn’t feel loved so she withholds respect.  And round and round it goes.  Both the husband and wife feel deprived of a fundamental, God-given need they both have: she to feel loved and he to feel respected (Eph. 5:33).Ladies, there’s more.  Brothers, correct me where I’m wrong.

Decision Making As an Example
Ladies, when your husband has a decision to make, you guys have discussed it, and he seems to be delaying: Don’t keep talking about it.  Here’s why.  Your husband may not be a good decision maker; I don’t know him.  But this I feel somewhat confident about: many women make their decisions by talking through them; many men make their decisions by brooding over them.  Many men need to turn the thing over in their heads several times, consider different angles, and settle in their own souls that they’re doing the right thing and avoiding failure.  Remember: sometimes we feel like we’re one decision away from blowing the whole thing up.  We need the time.  It’s not that we haven’t heard you.  We have; oh, trust me, we have!  We just need the time to know our own minds and own the decision.

Now, I can understand why the woman feels as if her husband went into some dark mental cave and she’s standing outside waiting for him to come out.  She’s wondering, What’s he doing in there?  Why won’t he talk?  We need to make a decision and get this thing done!  And, as she feels that way, she feels neglected and unloved sometimes.  The way she expresses that ranges from saying, “Honey, can we talk” to accusations “You don’t care!” or even a rebellious “I’ll do it myself!”  Here’s what you have to remember: He does care–perhaps too much.  The average husband doesn’t want to harm the family in any way.  He wants to get it right.  And when the wife keeps asking, “When are you going to decide?” it’s like she’s throwing rocks at him down in that dark cave and yelling, “Come out here right now!”  Or, to mix metaphors, it’s like standing over his shoulder and yelling “Not that wire!” while he tries to disarm a bomb in the dark!

That pressure has two consequences.  First, he can’t own the decision and serve the family with confidence because of the constant interruptions.  Second, he abdicates.  He emerges from the cave and says something like, “Well, let’s just do it your way.”  And he thinks or hopes he’s pleasing you.

But, boy, why did he say that!  That’s not what the wife wanted to hear.  She wanted leadership, not what she interprets as another passive “you do it” response!  Cue the crazy cycle.  She doesn’t feel loved so she doesn’t extend respect.  He doesn’t feel respected so he withdraws love.  Round and round again.  The relationship grows colder.  Neither person feels “heard” or understood.

Wives, please recognize this: In a world where your husband might feel like he’s always earning respect, defending himself and his family, and worried about messing everything up, the last place he wants to have a fight about respect is in his home with his wife.  If he comes home and doesn’t feel respected by his wife and children, it’s the worst possible situation to him.  He can’t win.  He only has three options.  One: He can fight you back, in which case he feels all the more a failure and doesn’t even respect himself.  Two: He can mentally check out while at home (play video games, watch ESPN all the time, check out of family activities).  Three: He can physically avoid the home (work longer hours, drive home slowly, go out with the boys).  The worst thing a wife can do to her husband is make him feel disrespected and dishonored in his relationship with her and in his home.  There are many ways to do that; the most common is with the tongue and tone.

A Basic Way Forward
So, what to do?  Ladies, respect your husbands.  Make your main ministry to him a ministry of affirmation and encouragement.  I don’t mean flattery.  And I don’t mean never share honest feelings and concerns.  But never share those things in a way that attacks his sense of confidence and self as a man.  If you don’t know what that looks like, ask him–after a period of communicating to him the simple message, “I respect you.”  You’ll be surprised at the amazing changes that happen in your man’s life when he hears you say in various ways without flattery, “I respect you.”  You’ll be surprised at how eager he’ll be to love you as Christ loves the church.

Brothers, let us love our wives.  Let us set aside the fear of failure and give ourselves.  Nothing I’m writing here is meant as an apology for laziness and neglect.  There is the guy who just isn’t trying, never has, and has decided that not trying is safer to his ego than failing.  If that’s you, you need a swift kick in the pants and to man up.  But most of us should realize (a) the world isn’t going to fall apart if we make a mistake in leading and loving our wives and families (there’s no test or pop quiz or ‘sudden death’ period), and (b) our sovereign God reigns over our mistakes and failures and purposes to turn them into our advantage and glory (Rom. 8:28; 2 Cor. 4:17).  If you need time to think and make a decision, tell her so and tell her when you’ll decide.  If you need her to stop talking to you and start talking to God while you think, lead by telling her and praying with her.  If you need help in any area of leading and life, humble yourself and ask for it.  The Lord’s grace abounds in the brothers around you, and He does not withhold wisdom from those who ask.